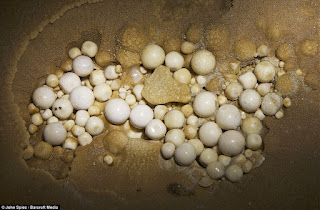 When a pregnant dragon dies, the young starve in their eggs. Very very occasionally something awful seeks the corpse. It wants a necrotic death-toy and, finding one, cranks up the wasted flesh with bleak automatic fires.

The eggs, lying moon-white in the corpse-fat earth, are forgotten. But, the foetal wyrmlings curling in their necrotic yolk, stir and start to live again. 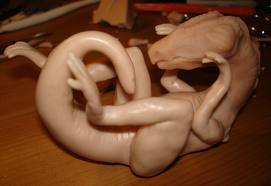 The last thing they recall is starving to death inside their mothers womb. A Dragon, even pre-birth, has the intelligence of a man. These un-dead ever-starving children, genetically prepped for Raptorous majesty, are unshaped by any material experience. They are hungry, cannot eat, and cannot die. Eventually they break the egg, wandering in birth-flocks, looking for something they cannot find and do not understand. Then they return to the egg. They do not understand the world. The egg is all they know. Their bodies are unripe. They crawl inside and carefully re-build the shell. This takes time to learn, but they have time, infinite time. They wait inside. Sleepless and tense.

Something disturbs them. They emerge. Afterwards, maybe, they move the eggs. Climb within and rebuild.

Perhaps the endless shiftings of the river-pools remind them of their mothers heart. They don't feel cold. The thoughtless bubbling flow that gently and ceaselessly rocks them in the infinite night may fake a mothers touch. Lulling them to the edge of unachievable sleep. Perhaps underground nothing will bother or disturb them. Perhaps the cold, smooth Oolites in the cave-wells remind them of a nest they've never seen. But perhaps, it is just possible, that something places them there, a half-deliberate trap or lure, of what purpose no-one knows.

They crawl into the pools in river-caves where Oolites form. Scatter amongst them in re-assembled eggs, and wait.

Until you disturb them.

A swarm of necrotic ice-cold dragonlings, desperate for a parent and a meal. You will play one of these roles. They will instantly imprint on what they see, like Geese. They will follow you in the darkness, climb upon you rubbing their cold rank scales against you, seeking a warmth they can never feel. They will watch you with keen bright intelligence, learning and forgetting as their foetal rotting minds decay. They are looking for a signal they cannot understand, a behaviour they cannot adopt.

This albino pig makes you shit yourself and weep.

All those predators have to eat something after all. The Sonic Pig resembles the terrestrial version. It's white, and long instead of fat. The legs somewhat extended, it climbs like a goat and can swim. It eats anything that can't fight back.

A Sonic Pig senses its way with a mad pink frilled out nose. It's face turns back on itself into a wet red starburst fleshflower as wide as the animal itself.

It's defence is an ultra-low frequency organic boombox. The pig-throat swells out like a toads. The flesh awash with interference patterns and held breath. The alarm noise it makes sounds like a drum and base rave burning down. A heard of pigs in retreat is deafening and can be felt for miles around. It's often mistaken for distant geological action.

The pig herds know specific sounds to drive off threats. The long-wave vibrations are designed to wobble your organs and make your bones hum like a washing line in wind. They don't do much damage, but, one of the noises produced is the semi-mythical 'brown note'. A cave pig makes you poop yourself. The physiological effects also mimic a concussion, producing dizziness, disorientation and despair. (Minuses to DEX, Save Vs Breath, and WIS after being caught in an danger-crump.)

Sub-terrestrial hell-states use slaves to farm the sonic pigs. It makes no difference the them if the oppressed are shit-stained, deafened and mentally upset. In fact its pretty handy in controlling the population. A swift shift on the pig ranch quickly numbs the freedom-lust.
Posted by pjamesstuart at 13:41