We Played Inquisitor - Game Two: Rise of the Meta-Coral!


My initial review of Inquisitor from several months ago here.

And the previous game in this sequence 'Hunt the Fat Priest' here.

The conditions for this game were decided by the terrain Evan had already prepared and by the suggestion that the second game take place a year after the first.

Here you can see Evans beautiful chunk of wood that he spent an entire night messing about with;


As it turned out the year thing didn't end up having a huge impact, seems conditions in the Imperium Nihilus are so drek that even after a year of scavenging the only real improvement to anyone's equipment was that one of Rams characters brought a lasgun.

Since Evan kicked both our asses last time, and was on his own side of the table, he would be the 'villain' for this game while Ram and I both tried to stop whatever he was doing.

Things were also affected by our gradually increasing knowledge and understanding of the rules. Particularly what happens if you get shot at (Test for pinning, roll to hit, roll location, roll damage, deduct armour, check for system shock, check for knockback I think?, add damage to damage total and check to see if out of action, check to see if damage has moved you up another bracket on that location, roll on location damage tables and account cumulative effects, not all this down somewhere. Pretty simple really.)


Game Two: Rise of the Meta-Coral!

An year has passed on the world of Spen-5. The forces of Inquisitor Delbrück and the cult of the Imprisoned Moon agree to, if not exactly team up, then at least not deliberately fuck with each other as they both search the planet for Inquisitor Du Miir, Frater Gorgos and their horribly mutated new allies.

Unfortunately this is Imperium Nihilus, which means that the Wi-Fi is never on and Amazon won't deliver. The 'good guys' have to scrape by the old-fashioned way hunting out fragments of rumour and trace facts until they can finally put the pieces together.

Gorgos and Du Miir plan to wake the Meta-Coral!

What exactly this is, they are not sure, but it sounds bad. (It's probably a slow-developing heretical bio-experiment left over from the original settlers of the RiWeal nebulae).

Gorgos has gathered his freaky mutant flock for a gigantic sermon/sacrifice. Du Miir and the psychic mutated Astertes/Giant plan to combine their forces in some kind of sacrificial ritual which will bring this 'meta-coral' to some degree of active self-awareness.

BIO-HERESY! And not the low-key kind with the test-tubes, the Fucking Gigantic kind!


The ostensibly-allied factions adopt tactics typical of their background and training.

Delbrück and his entourage use synthetic hormones to infiltrate the hideous congregation of Frater Gorgos, trying to get close enough to make a run at the meta-coral. 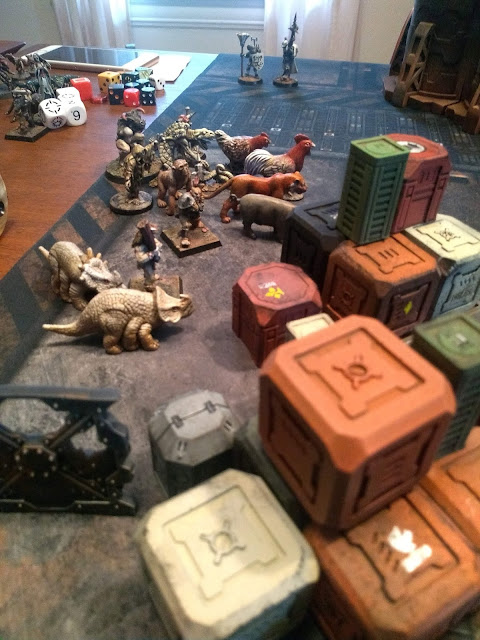 Meanwhile, the Cult of the Imprisoned Moon rock up with an old chimera-chassis tank packed with explosives, driven very slowly, by a blind man.


This ends up being named the 'Jank'.

The Cult of the Imprisoned Moon leap from the 'Jank' and dash into action; 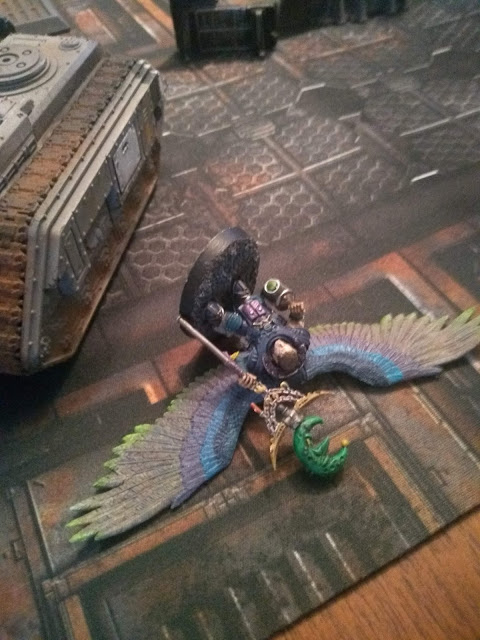 And are immediately knocked right the fuck down by Du Miirs graviton-gun equipped thrall.

And by hilariously bad rolling when attempting to scale the base of the Meta-Coral.

At least for now, it seems that everything depends on Inquisitor Delbrück.. 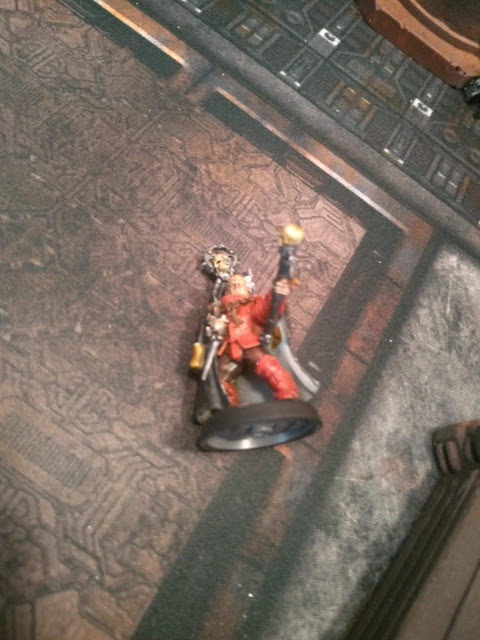 Unfortunately, Delbrück takes a poison-coated needler round right away, causing him to hallucinate and to effectively attempt to take his own leg off with his power blade. 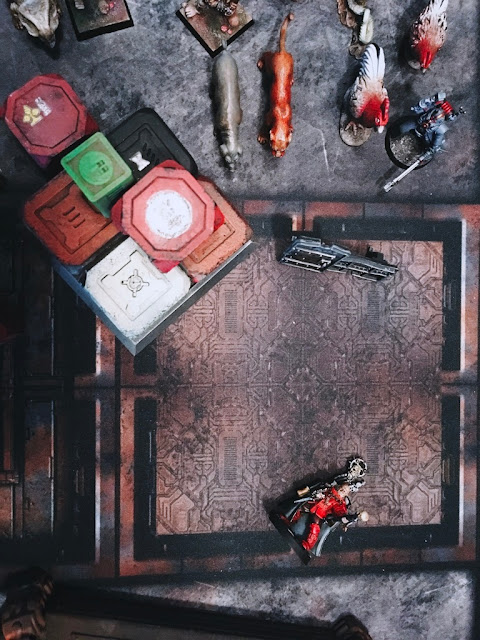 Onthu Prime responds to this with innovative courage.They try to rile up the animal/mutant Bio-Horror congregation, causing them to stampede, hopefully providing cover for an advance. 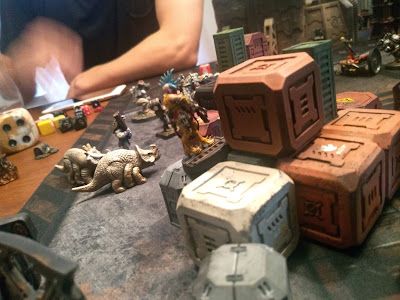 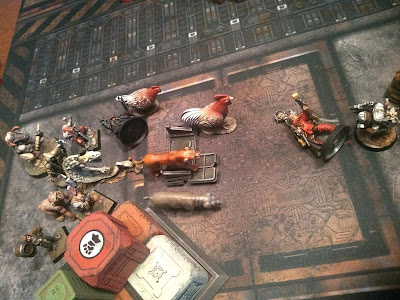 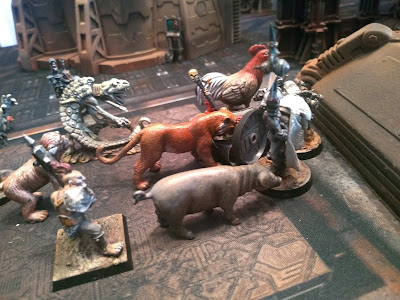 This arguably sort-of works and does at least occupy the Meta-Corals defenders for a little while.

Meanwhile, Apothecary Krax advances at speed upon his downed comrade. (We had worked out that if you sprint, then aim, then fire, you get more movement and better bonuses than simply running or walking and firing normally) 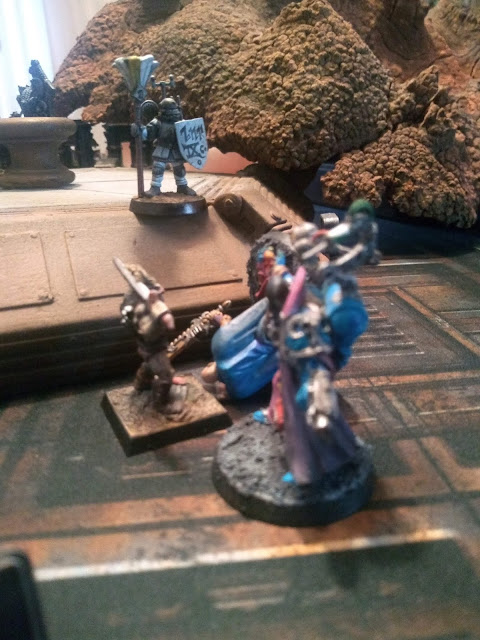 Due to the complexities of the initiative system, (and our initial failure to understand that aiming carries over between turns) Krax and the Zealot of Gorgos get into a three way mexican standoff, with the Zealot standing over Chapter Master, ready to finish him off, Krax with his pistol zeroed on the Zealot at point blank and the House Shen bannerman aiming in turn at Krax. 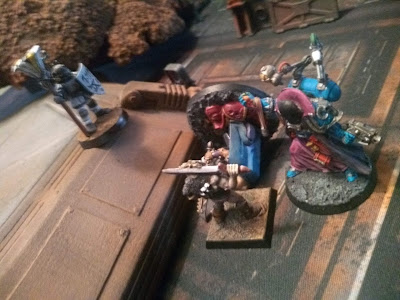 Everyone opens up, leading to an absolute massacre.

The Bannerman survives, along with Chapter Master, but the violence of war must have brought the old degraded Astertes round, for he leaps up and smashes through the Bannermans defences, crushing his arm. 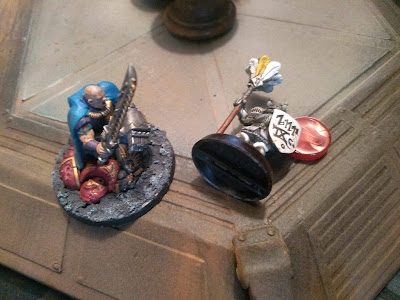 With much of the rest of the Meta-Corals protectors now occupied with Delbrück, the doorknob alter and the path to Gorgos is now un-guarded... 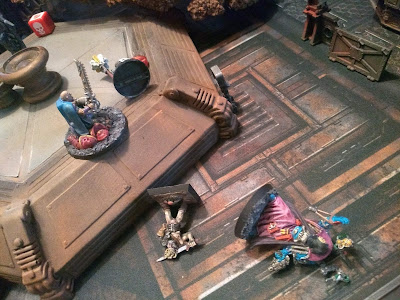 Meanwhile, Dione, the most useful member of Delbrück's team (and the only one to bring a long-ranged weapon) is desperately trying to pin down Frater Gorgos (we remembered the pinning rules).

While the Fraters psychic giant attempts to blast her with its mind powers.

She was still probably the most useful of any of the 'good guy' teams, at least managing to pin Gorgos for a turn and slow down his ritual.

The situation for Delbrück has only worsened. 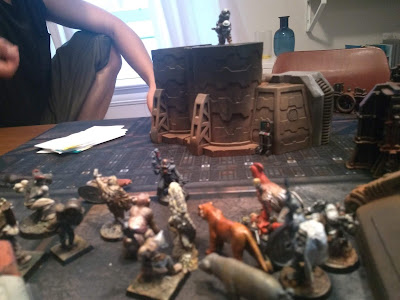 After being trampled by his 'cover' the Anthrodact 505 manage to frighten away the mutants, turning them on Onthu Prime.

Suffering from self-inflicted wounds, cut off from allies and surrounded by mutants, Al’Pharem 503, Anthrodact Chirurgeon advances upon the fallen Delbrück. His intention, to remove the Inquisitors brain!

But at least he isn't guarding the Meta-Coral at the same time, and the Great Primaris has recovered from Du Mirrs Graviton blast. As the giant attempts to break his mind, the stubby mutant lurches into action on his little legs. 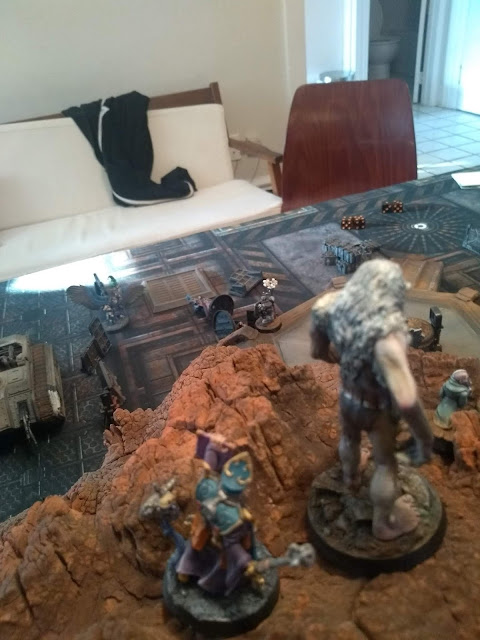 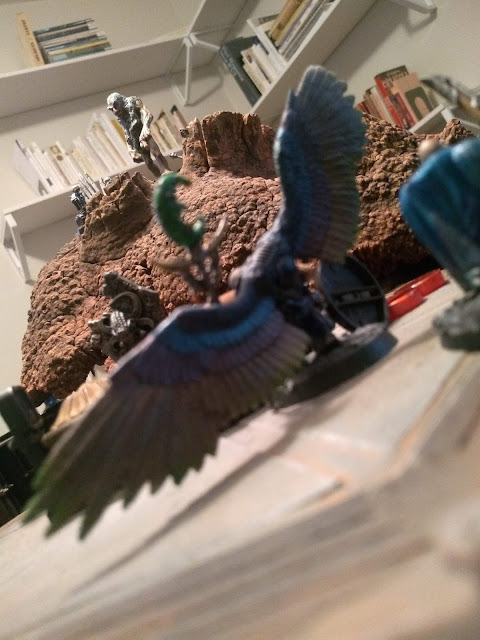 Will he manage to do anything useful?

Well, no. He does grab for the pistol of the downed bannerman but fails to seize it and is attacked by that now tri-limbed and bleeding homonculi. 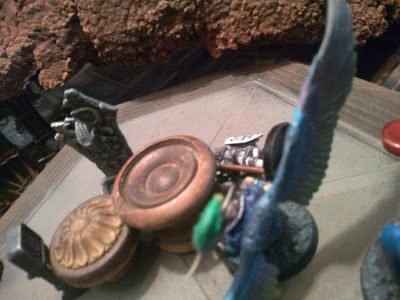 The 'Jank' has but one turn left before Gorgos completes his ritual. Though driven by a blind man, Arcturus has faith in the Emperor that his cause is just, and floors the pedal. (Making a risky roll).

The Jank overturns against a piece of living horn extruded by the Meta-Coral, and explodes. Doing terrible damage, but nowhere near enough to prevent its final ascension into a self-aware and deeply heretical life-form!

The Cult of the Imprisoned Moon and the retinue of Delbrück have failed pretty much absolutely. Du Miir, Frater Gorgos and House Shen have succeeded in awakening the Meta-Coral and its terrifying genetic secrets are now theirs to exploit. As well as that, they have Delbrück's brain....

In the Imperium Nihilus, a new horror has been born to trouble an already-riven Galaxy..

Then we went for dinner.

There was almost unanimous praise, or at least interest in, the initiative system. Which involves specifically naming each individual action you intend to complete in sequence, the rolling dice equal to your speed. Then for every 4+ on a D6 you complete one of your list of actions. It sounds mental but it seems to produce very 'real world' chunks of imagined behaviour.

We used the rationalised character sheets and a lot of the gaming methods I saw utilised by David Fincher, who Refereed the game I played in in Stockport, and without which I think it would have been impossible to manage. So thanks for that.

The fact that this is a game played almost exclusively by obsessed hobbyists and that you have to covert your own minis simply to play, means that in a way, the rules *get* to be capacious. The kinds of people who might deliberately exploit an unbalanced or unclear ruleset are going to be massively put off by all of the stuff you need to do to play this game. The enormous sunk cost and investment of skill level and time means almost that powergaming effectively can't exist in Inquisitor.

I genuinely can't tell if Inquisitor is a 'good' game or not. My initial review was that the system was labyrinthine to the point of madness, and it is. Most of us are averagely smart and we had Brendan and his galaxy brain to help out on the first match, but we still had to play long hours before we started getting a handle on many of the rules.

However, even in the wierd half-correct state we played it in, the game does actually work. It produces the 'world' of Inquisitor. A gloomy backstage to the Warhammer 40k mythos populated by oddities.

A lot of the knockdowns and embarrassing failures and tactical fuckups might seem ridiculous when you read about them here, but they are actually quite fun to play through, and despite the fact that Ram and I got totally nailed in both games it still felt like a worthwhile, and not depressing thing to so because the sense of particularity and incident was so high. There is a particular melding of the tactical and story elements in quite a granular way that produces powerful and interesting situations and dominant memories. I think someone remarked that a game of Inquisitor felt like the perfect setup to an RPG campaign, it does a little. I'm sure we are all wondering what Delbrück's crew are going to do now. Probably Ram will have to convert a new model, maybe advance Dione to Inquisitor, and Evan will have to make a brain-torture device model to show he has Delbrück's brain.

Judged purely as an RPG its insanely hyper-complex and simply doesn't have rules for a lot of the non-combat stuff you need to do. Judged purely as a game of tactics, well its still insanely complex and has loads of fluffy stuff and odd bits and doodads. It's almost the opposite of a "rational" game.

But as the strange thing it actually is, an extremely dense quasi RPG/Tactical/Kitbashed Art Performance game for hipsters to tell combat stories about characters though imagined space and time, it actually works perfectly. If you want to play a game of Inquisitor, there really is no better game than Inquisitor. Nothing else will do it quite as well.
Posted by pjamesstuart at 06:17