Oh the Humanity - a Review of Inquisitor

One of the best art books GW has ever put out.

Also the rules to a game are in here.

I think this inspired the creation of Eisenhorn, (more specifically the editor at Black library faxed Dan Abnett a bunch of the art for this and then he spontaneously wrote Eisehorn). Eisenhorn was good, but also made money, and so opened up the whole of the back room of the 40k universe. Welcome backstage everyone!

These aren't to my taste or preferred rules aesthetic or design whatever so I will be quick.

These rules, and the whole of this book, seem to have inspired to the Fantasy Flight 40k RPG. That game shares Inquisitors propensity for great art and dense background and I'm pretty sure a huge number of artefacts were directly ported over between the two, in particular a THRILLINGLY GRANULAR d100 mechanic.

Someone wiser and better read than me can tell you where all this stands in respect to RPG development.

This is meant to represent a very small number of models in detail, but even in an RPG where I would only be playing one person I would still hate this level of granularity, and this particular *axis* of granularity.

They model EVERYTHING, in detail, along the same essential scale. So you get the irritation of having to account for every tiny little element and aspect of the already somewhat labyrinthine ruleset, and having to do that so you can add or subtract a tiny bit from a d100 die roll. This is mainly about remembering a huuuge list of situational modifiers, finding reasons for them in the environment, arguing with your opponent about them, persuading the DM, and all any of that does is move one dial back and forth a few percentage points.

This is the opposite of what I personally would want from a ruleset.

It does provoke things that I like in that it makes the creators come up with a lot of STUFF. Guns, items, special powers, weird personality and body stuff, and I like reading about that a lot. That is essentially why I read the FF 40k books, for lists of things, backgrounds, the kind of imaginary build and imaginary fun you call 'lonely play' I think.

I never actually played that game, I don't think I ever really wanted to play it much.

The best gunfights I've ever personally seen modelled in an RPG are still in Cyberpunk 2020.

But gunfights are paradoxically a bitch to model fluidly and I've written about that before so, onwards; 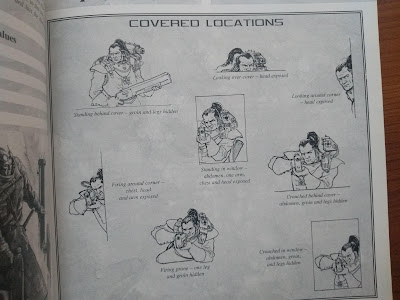 Actually these little images of what it means to be in cover or crouching behind a wall are very cool. 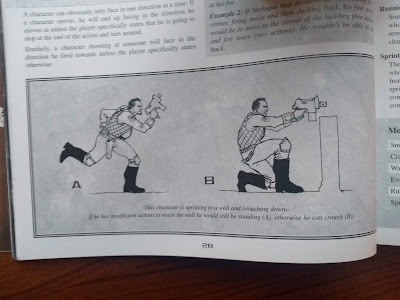 Its really interesting how GW keeps coming back to this concept, its the birthplace I guess; this oppositional small model count skirmish game/also an RPG. They started there, its essentially what rogue trader was. That grew into 40k. Necromunda has looked at it twice. Kill Team tilts more towards the game but has rules for depth and expansion into a  squad-based quasi-rpg. Shadespire and Nightvault or whatever, haven't played them, seem more boardgamy, not RPG's, but still these little quite detailed skirmish games, albeit with different logic.

Its like GW has all its 'editions' of this meta-game operating in one way or another at the same time in some cases.

Ok its a poor comparison in many ways. But it is somewhat suggestive of the limits and similarities of the kinds of branching paths games can go through as they change and how the internal space inside the games possibility can be colonised a bunch of different ways.

You can do the hyper detailed one where every option is specified and has numbers and there are lots of splatbooks and pdfs, the very abstracted one with the highly balanced maths but it kinda feels a bit mechanical, the weird original one that arguably barely works and has the potential for almost anything but is mainly taken up by people who are in some sense game engineers themselves
e.t.c.

That's enough rules, I haven't even played this myself so Ill shut up about them.

Gotta talk about something much more important. 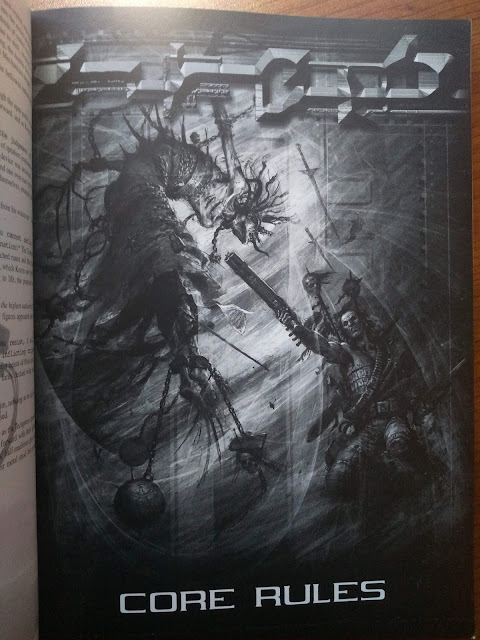 Holy fuck that’s a shitload of talent in one book. It’s a motherfucking supergroup. Except a supergroup where all the people in it seem to actually like being in it and they all seem deeply enthused by the ideas and the concepts. (Weep a crystal tear as I don’t think we ever got these people back together for anything again. (Then weep another one specifically for Alan Meritt)).

As a reader I'm so glad they made this.

If I was a GW manager at the time I would be weeping as I don't think it made much or any money for the company so you just had a host of the companies best minds working on a white elephant for ages.

There is so much character and feeling in every single image, some are less interesting but I can't think of any bad ones.

It's humanity. The humanity which was masked, compressed, clenched down on and hidden in the mass wargame. The whole book is like a book of portraits in a way, in its emotional valency. Like a school of painters have only been doing mass battle scenes, and they were pretty great, and then whoever is in charge has gone;

"no, just make me a portrait of that soldier, that one right there. Show me everything about them in an image, and take as much time as you like." 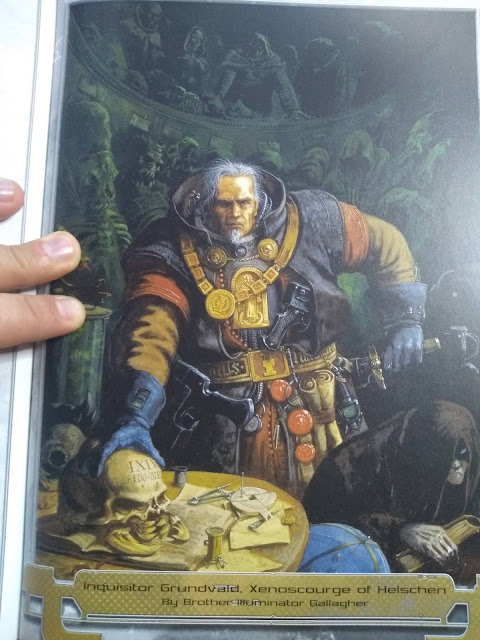 Not always directly, like the art is not always portraits, but emotionally. And I think that is where part of the energy release comes from. 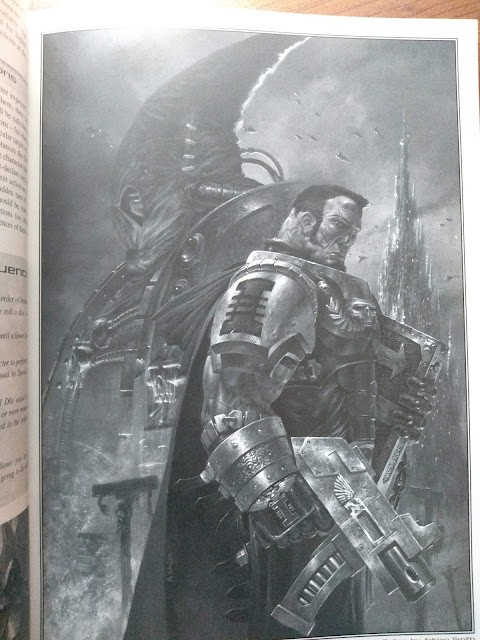 I mean its highly, highly literal in the character example pages as here we get a rare treat.

The Blanche concept image as a background, a more detailed front image by, I think it varies, and eye-knowledge not good enough to be sure each time so sorry.

Then a textual description, then stats and items. So same person described four different ways each time, stats, text and two images by different artists but reflecting each other.

Almost everything that isn't models or minis is B&W and its deeeep, just this deep textual and visual density, and while there is a lot of supermurder there are a fair few very still images.

I remember Ruskin, or was it someone else? Saying that the Gothic cathedral was like a palace made of shadows, made specifically *for* shadows. This very white material in this very gloomy place (Northern Europe, lots of polarised light, slow dawns, lots of cloud), and these complex layered structures or elements so that you get this layering and massing of shadow, and shadow within shadow as the paleness and curve of the stone lets you see the fading and shade of the shadow - showing you the objects mass by its working. 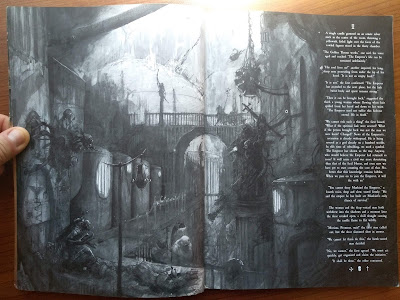 Well this book, as much as, and maybe more than, any other 40k book, is a hive of shadows. These very white people with these deeply incised faces that look as though they were carved with sharp tools, and just layers and layers and layers of shadows from alien suns, burning braziers, candles, flamethrowers, sacrificial pits. People like cathedrals, with all the great florescence of objects and signs and coded symbols they are bestrewn with, all this layered history and meaning sculpted around them.

And also they are fighting loads and blowing stuff up.

I would love to understand why this didn’t quite work out. Was it the 54mm scale? Ahead of its time conceptually but lagging materially? The difficulty of conversion? Just a small market for a narrative game where you have to put a meaningful amount of work in, but its also an oppositional game? 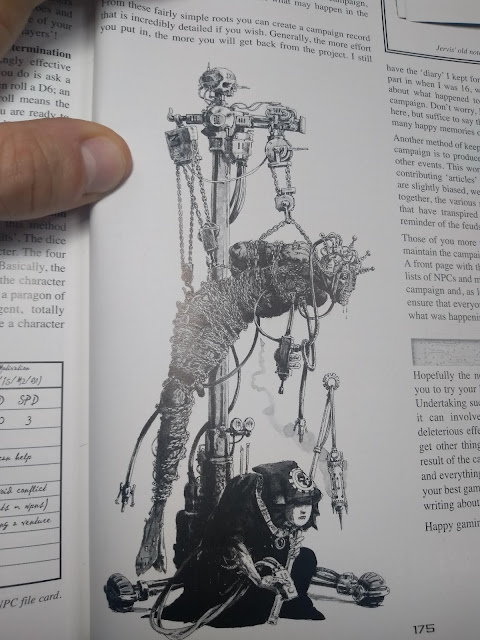 Its this idea space, the one that birthed the company, it seems to be something that never quite works with the same success as its derivatives, yet it seems pregnant with possibility. Competition, and co-operation. 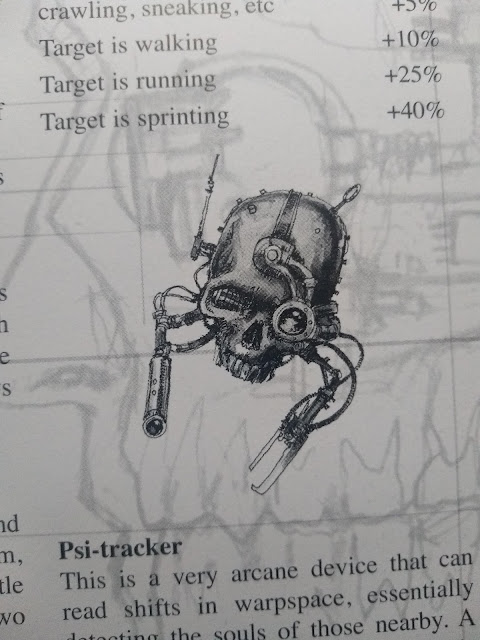