This is a strange, beautiful and original work which Scrap sent to me and which I knew nothing about beforehand.

From the opening pages description;

"The Book of Weird

being a most Desirable Lexicon of the Fantastical Wherein Kings and Dragons, Trolls and Vampires, to say nothing of Elves and Gnomes, Queens, Knaves and Werewolves, are made Manifest, and many, many further Revelations of the Mystical Order of Things." 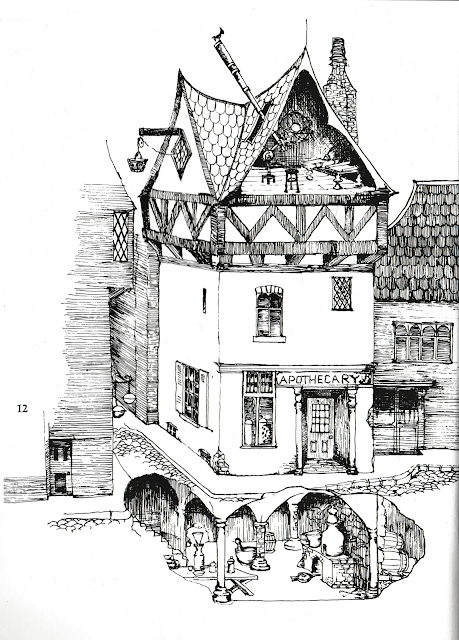 I and Scrap both wondered if this was an Appendix N work. Copyright 1967 and published in 1973 it seems to be the kind of thing that Gygax would be reading as he was working on D&D. But I have never heard a mention of it until now. Perhaps it simply swam in the same sea, a A pre D&D Cambrian explosion book, like a soft bodied organism that has not yet grown a fossilised shell. 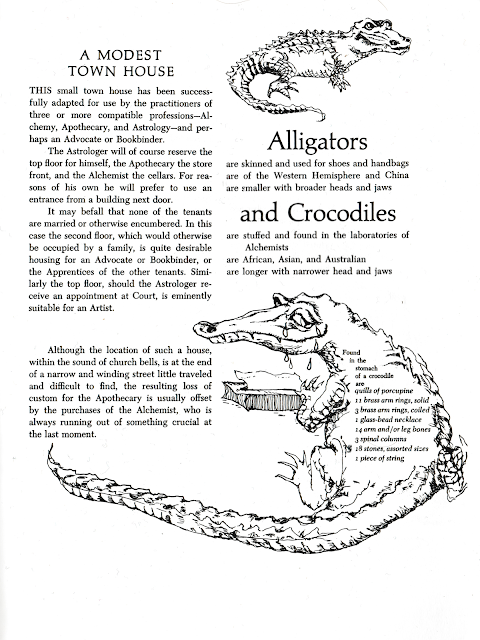 It is a kind of parallel text to the Manuals and codification of Dungeons and Dragons. But in this, the book itself is an act of play, not a guide towards one. D&D is a 'real' book of record. the things it refers to are imaginary, but you do really need to look them up in an immediate coherent way. Book of Weird is a 'false' or pseudo-record.

It uses the same listing, ordering and information hierarchy as a book of record, but bends those structures to make them deliberately, slightly impractical. It will 'hide' elements inside strange hierarchies of meaning. 'Apotheosis', the act of becoming a god, comes under 'Guises and Disguises'. Its also insanely hyper-specific at points. A 'Dastard' is not a 'Poltroon', both are quite different. Within the entries are winding courses of words, slight pseudo-formal backward-phrasing, and verse. Like very serious answers to the kinds of question a child might ask.


And a construction of unknowing. The imaginary authority can tell you this particular thing, but this other thing adjacent to it is quite unknown. Of course both are largely products of the creators imagination, so what is known and unknown about the suggested world is a purely-constructed silence deliberately inviting creation and interpretation on the part of the reader.

It is also a work of visual art, illustrated by Byfield on almost every page. One huge thing that makes it different to the Gygaxian branch is that text and image are imagined spatially, emotionally and factually as-one across every spread. Image relates to text, and the balance of the image to the text is fluid and weighted, so the pages 'flow' not just in a linear sense in the way that their meaning is apprehended but in a spatial and proportionate sense. 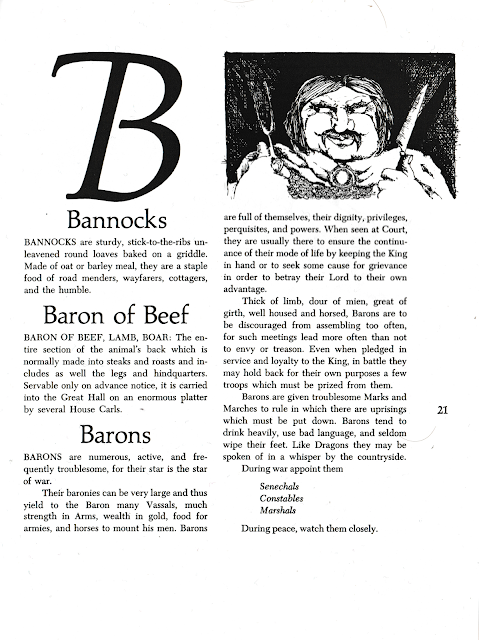 You can still use it but it is made to be deliciously, a only slightly impractical. Things are not quite what would be expected so reading is an act of discovery.

Of course, Scrap and I did a lot of this in Fire on the Velvet Horizon, its only reading this book, made 50+ years earlier, and thinking about it, that has let me put some of those methods and techniques into words. 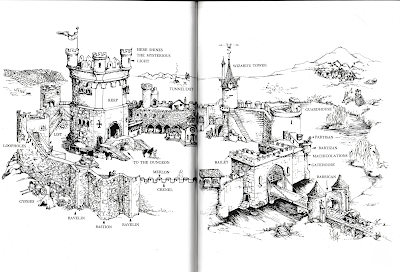 The original version was titled 'The Glass Harmonica' an item referred to only once inside the book, in an offhand manner, and which, if it has some poetic relationship to the meaning of the work as a whole, is beyond me. This very Scrap/Patrick touch was it seems too obscure for the publishers and they changed it for the next edition. 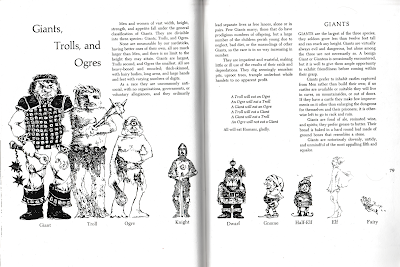 The fictional and imaginative world this draws from seems to be a similar one to the 'Walter Scott Shared Fictional Universe' I imagined in previous posts. A historical-dramatic viewpoint and aesthetic grouping running from Scotts popular novels, through 19th century theatre and into early 20th Century film, ending with 'The Vikings'.

It is a story-world more than anything else, a little like the Discworld. The Barons (well horsed and housed) of 19th Century Medievalism, mix with the Beux of 18th and 19th century modern fiction. 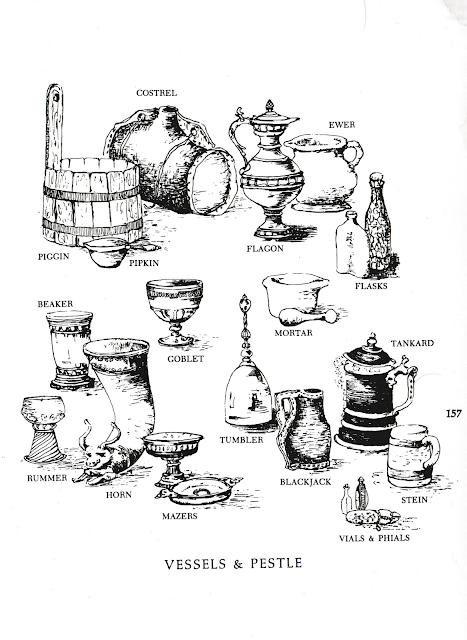 Soothsayers from Shakespeare mix with fortune tellers from penny novels. The Landscape seems to be the same generalised imaginative Landscape of the Anglo diaspora between the 17th and 20th centuries. Something a little like a romanticised England, but bigger in scale and with some things England never had.

Something else I finished recently was the audiobook of Name of the Rose by Umberto Eco, which doesn't really have much to do with Book of the Weird. But, Book of the Weird is a kind of playful pseudo-record using the structure of a reference or guide to create an adventure in reading, and Name of the Rose is all about structure, information hierarchies, the ordering of knowledge sometimes releasing, sometimes obscuring what is known, plus it fits Byfields theme to throw in some random thing so here you go.

I listened to Name of the Rose in the middle of a huge list of Warhammer and specifically Horus Heresy Books. There's not much different between the two. The whole situation in Name of the Rose could happen in some forgotten corner of the Imperium, with only a few name changes and little else.

Its mainly about loss and watching time eating reality.

To start I thought William of Baskerville was the hero of Name of the Rose, and he somewhat is. He's the 20th century hero guy in the 13th century setting, the one who you somewhat wish would turn up, who says all the right things and thinks all the right things. But by the end he seems less like a hero. He is still a good man, or at least better than many and a whole lot better than the villain of the story, but he has his own decadence, his own moral laziness. His love of his own acumen, his willingness to treat the events around him as an elaborate game and his acceptance of being pulled into a ridiculous and pointless intellectual game towards the end of the book which helps to totally fuck everything up.

And I don't like that they burned the girl, but apparently neither did Eco. She is silent in the book, I assumed it was named after her silence and the gap she leaves in that world. But I learned later that the title is a kind of nothing, an empty riddle, so my interpretation tells us more about me than about him. My thought was that almost everyone else involved in these events either deserves what happens to them or at least partially deserves it, the only person who really doesn't deserve any of this is the girl.


Anyway - reasons this fits in really well with Warhammer stuff

Age of Darkness - everything is a mess

Monotheistic Faith - everyone follows the same hyper-intense Abrahamic monotheism but most of them are corrupt in some way and micro-differences in worship mean they are at each others throats half the time.

This is a paradox or polarity which still exists today, though it is hidden of smoothed away with the polish of technology and material wealth. There are still big arguments about what knowledge should be allowed to spread, and how it should be allowed, about whether our means of transmitting knowledge are good or whether they need to be controlled.

The closest equivalent I can imagine is arguments over Youtube, Facebook, algorithms and conspiracies. The labyrinth today is inside-out. Instead of everything being locked within and things only trickling out drip by drip almost everything is outside and relatively few things are locked in the hidden rooms, but the maze of knowledge has not abated. Now thought surfeit rather than famine of knowledge. And we are still arguing about what has to be jammed in the hidden rooms, trying to simultaneously see if you can jam conspiracy theories, alex jones, anti-vaxers and auto-generated quasi-peado youtube channels etc back in the hidden rooms at the centre of the labyrinth, while also worrying a whole lot about the fact that we have a hidden room at all.

The times seem to require that we be much more like Jorge of Burgos, standing at the far other end of the Renaissance he was trying to prevent* he still seems like a monster but an at least partially-right monster

We are all Inquisitors now, the texture of our reality demands it.

*For Jorge this is a Lovecraftian story. "Don't let the book out, it will kill god!"