A Review of the Oxford Dictionary of Nursery Rhymes

(This showed up on my Goodreads page first, so if you read that then you have already read this.) 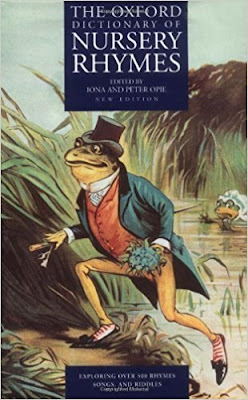 The dusty hard-drive of oral culture found in the back of a drawer, lets dig out an old emulator and see what's inside.

(Of course we rarely have access to actual oral culture as it is annihilated and transformed by contact with the structure of academic recording, more on this at the end. What we actually have is records of the point of transformation and/or translation from orality into text, almost always into print since it requires the cheapness and replicability of print to make 'common' culture worth recording to most societies.)

It’s a mixture of trash and gold, but even the trash isn't actually trash because, like Belloq's watch, it is ennobled by survival and time, and because, like an ink-stained stream used to trace a water table, watching its flow and mutation lets us trace the structure of human thought.

A huge amount of nursery rhymes are alterations or mutations of the historical version of pop-songs; broadside ballads, folk songs, music hall numbers etc. These provide the seed structure for a lot of rhymes. Like a mother singing a half-remembered chorus of a Taylor Swift song, altering the words, keeping the structure.

If there is one huge failure with this, and with the whole culture of transmitted orality studies, it is that there is no smooth or *commonly* readable way to encode musical notes, rhythm or any of that musical stuff in text form. Even Rubins Memory in Oral Tradition, didn't talk enough about the music.

In their natural environment, a vast range of these structures exist, are transmitted with, generated by and possess a deep interrelationship with music. They exist sung, the exist played, they are symbiotic with instrument, voice and song on a lot of levels, and that very rarely shows up in books like this.

For good reason; it would mean opening up an entire new, parallel track of scholarship and resourcing it like the first track.

And because you would then need to integrate the two, needing more time and more resources.

And you would need to find a way to present this to a mass, or at least a common/educated audience - though modern neo-orality like Youtube etc, could be good at this.

But still, the text-based nature of the transmission of orality studies is a major, and unacknowledged limitation, and more dangerous BECAUSE it is unacknowledged - as people will default to text-fetishism.

Still a minor, but continual theme. 'Good' riddles (the kinds I like) where you could understand them even if they were translated. 'Dick' riddles, where the clue is that four kings each took an apple even though there was only one apple because the guys name was 'Fourkings' or some bullshit like that, Textual games as well, including some elegant verse forms made from the removal or alteration of punctuation and shifting of line-meanings.

The heavyweights of nonsense verse, Lear & Carrol, both based their early stuff on generative verses, subjects and forms from mass oral culture.

The moral universe of children, as seen through their rhymes, is arbitrary (yet rule bound), stark, intense, bordering on surreal (as in super-real), morally cruel or violent, funny, imaginative; loving both the excise and overturning of authority, highly animate (everything is alive, has intention and a self), with many changes in scale - living in shoes, floating to the moon etc.

Doubtless the moral view of children is shaped by the fact that they exist under the dominion of gigantic tyrants exercising what seem like arbitrary and inexplicable rules which they often do not meaningfully explain. And by the fact that things seem to exist, and not exist, to be brought forth, and to disappear, without any clear cause or meaning. It may simply be a rational view of an insane experience.

(Children live in a world where every useful object is out of scale for their use - too big, and where they are given other, arbitrary objects, which they may do with as they will, which mimic the larger objects but which are scaled much too small for their use. A child, for instance, cannot simply get in a car, they can be lifted into a giant one, or play with one too small to drive. No wonder they are obsessed with strange changes in scale; their world does not make sense.)

Counting rhymes are a big dal and, from textural analysis it looks like these may actually (some of them) be evolved or decayed forms of old, even pre-roman, counting rhymes.

Bouncing rhymes where the child is manipulated on a knee, finger rhymes where the adults hands form a kind of shifting model and where fingers become people, pigs, houses, churches and priests, are common. As well as limb-naming and face-feature naming rhymes. The body in space being at the primary root of much human culture.

To bring up Belloq's watch again, it doesn't take much processing or many revolutions through an oral culture for something to gain a feeling of deep numinous or oneiric ancientness. As if it referred to something huge and shadowy, just out of sight. But this feeling seems to have no, or little relation to whether something actually *is* ancient. A generation of oral transmission and manipulation might be enough to give something this feel.

Consequentially, Nursery Rhymes are plagued with minor academic, or general enthusiasts who swarm like flies and who are all universally sure that;

Any of these might actually be true for any particular rhyme. But usually they aren't. Usually its an old pop song about a squire, often with some dirty bits taken out and changed.

There’s a lot of dirty vague sex stuff in popular folk culture, as well as a lot of scatological stuff. Almost all of this is edited out either by gradual cultural transmission, or by some Yankee or Victorian with a pen. before the scatological stuff at least is put right back in by the children as soon as mum has left the room.

There are a few fragments, Snail, Ladybird, London Bridge, and a few others that are almost certainly really very old indeed. If you want to have strange thoughts about deep time and human culture, there you go.

There should really be a leather-bound version of this so you can leaf through it and intone mysterious stuff while giving people curious and meaningful looks.