The History of the Veins of the Earth

EDIT: So it is live, click the image to go to the LotFP site to purchase. 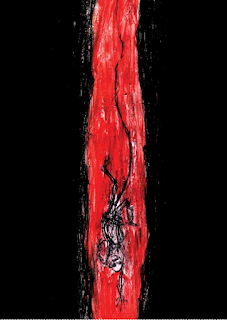 If you want the PDF on it's own you can get that HERE.

For anyone unfamiliar with the idea of 'Veins of the Earth' or who thinks its either that computer game that comes up when you google the phrase, or just the original quote from The Tempest, here is what it is.

This is a book that has been in production a looooog time. Longer than any other work I have done. Investigating its origins takes us way back to near the dawn of this blog. To illustrate this, here's a brief rundown of my publishing history;

August 2011 - I get my first laptop and, within a few days, create False Machine.

16th October 2012 - In a comment below this post we see the first public mention of the idea in a conversation with David. 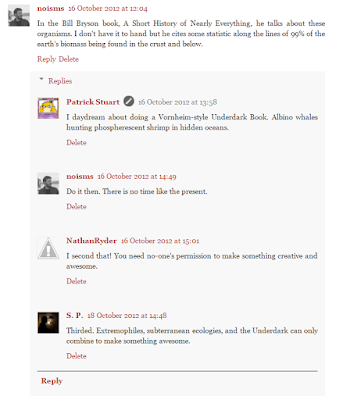 18th October 2012 - I accept Davids Challenge, he will create what ends up being Yoon-Suin and I will write Veins and we will RACE TO THE FINISH LINE. 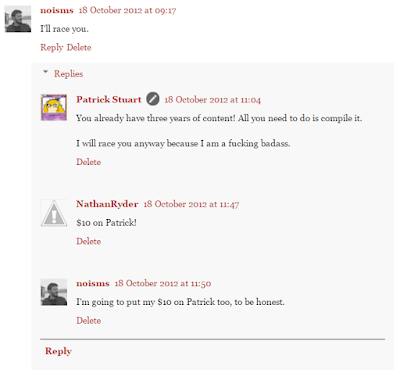 December 2012 - January 2013 - many of the Veins monsters were created in this period. If you check out the tag 'Veins' in the sidebar, or just click through to the period in question you can still see them there. 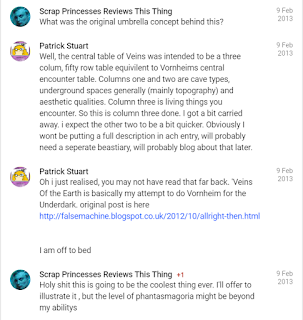 21st June 2013 - Zak first contacts me to propose the thing that eventually becomes Maze of the Blue Medusa.

26th October 2013 - The first Maze of the Blue Medusa draft is finished.

6th June 2014 - The first Veins of the Earth test print is created. I have never actually seen a copy of this print since, when I created it, I couldn't afford to buy myself a copy. I think everyone else in the production got one though.

24th June 2014 - Fire of the Velvet Horizon first proposed, as I remember as a 'simple' project to do after DCO. It turned out to be about five times as large.

5th March 2015 - Yoon-Suin released to universal acclaim. David CRUSHES ME LIKE THE ANT I AM. VICTORY IS HIS. He loses the $10 he bet on me to win.

8th March 2015 - Fire on the Velvet Horizon released. The world cries out; "Will there be a PDF?" and "I can't read this" to which we reply NO THERE FUCKING WON'T and I'M GENUINELY SORRY ABOUT THAT respectively

14th April 2017 - (the future) BOOM. Finally. You can now order Veins of the Earth. It's still going to take ten days to send as James forgot to order the packing materials.

So the times from conception to completion are;


So you can see, in a way, Veins is my first book, it's just the last one to come out.


BUT PATRICK, WHAT IS 'VEINS OF THE EARTH?

Belive it or not it actually started off as an attempt to 'Vornheim' the Underdark, to provide a way to simulate complex underground spaces during play, so that you could adventure in them, in the same way that Vornheim helped you to do that for cities.

"My God I wish he would shut up and get to the point", then this might not be for you. If your response was "I would like more of that, with someone having gone over the prose a few times then packed the lot of it up with some really excellent and savage illustrations with high production values, and I'd like enough of it that, if I smacked someone in the face with it, I could break their nose, and I don't mind paying for it"

"Wow I really liked DCO but I wanted to go down that big chain at the end and I also wanted a whole world waiting for me down there, and I don't mind paying for it".

Then CONGRATULATIONS! This might be the thing for you!

Half of it is monsters, the other half mechanics and lists.

All of the monsters are individually illustrated by Scrap Princess. They are designed to be as original as possible, for a lot of things I drew on the Science of cave exploration and advancements in genetics that have taken place since the 1970's. The Archeans in particular are a race based upon Archean bacteria. The Knotsmen are based on my feelings about working as a call centre operator in the debt industry for several years. The empire of the Endoliths is based on taking train journeys to work in winter mornings where the whole world is dark but a lamp or a house-light burning in the distance encompasses a fragile globe of existance that seems to drift like a bubble on a dark sea, and on actual endoltihs.

The back end has rules for the creation of large scale underground maps, large cave complexes and smaller cave systems. There is a relatively novel and simple (one you do it a few times) method for creating small networks of caves as you play, for when players go off the map or just if you want to improv something.

There are rules for cannibalising your friends and a neat mechanic that unifies currency and light, giving you a sound reason to keep running around underground.

And of course there are extensive rules for going insane. Also for getting mutated or 'altered' by your time beneath the earth. Oh and insanity itself is an actual psychic monster that hunts you through the dark, that's on top of all the other kinds of insanity.
I'll just show the contents page again.

It's about 100,000 words over more than 350 pages of A5. Scrap has art on nearly every double-page spread so it's an art book as well, some of it in black and white, some of it in colour. A few of her 'Cave Scenes' are amongst some of my favourite works that she has ever done.

Taken as a whole it's a pretty concentrated and intense wedge of culture. If it works it should be like a Stanley knife held to your eye.


AN APPENDIX N FOR VEINS OF THE EARTH

Here's some of the books I have on record and that I can remember reading. The Richard Fortey books in particluar were a big influence on both this and on DCO.

With luck this will be the last time I have to whore this out or include the 'Veins' tag in something. Those of you who have been following the progress of BFR will be happy to hear that it has reached the stage where even if I hang myself there is enough there for someone to produce a completed product so that will actually come out at some point.

If this does well (no idea if it will) we might one day go back underground. Right now I'm thinking either an Isles of the Imprisoned Moon book or a dErO book. But both of those will be SHORT. I am not making any more long RPG books for a good while. They drive me mad.
Posted by pjamesstuart at 11:24

Email ThisBlogThis!Share to TwitterShare to FacebookShare to Pinterest
Labels: Veins