Mariners Song of the Nightmare Sea 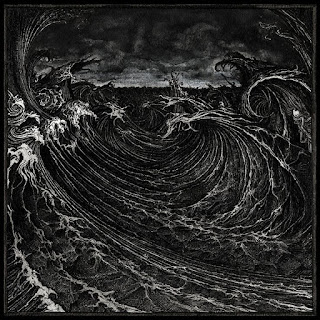 Give me a ship to sail the Nightmare Sea
and find the bone1 and iron-carved2 islands there,
to ride the stone-arched swells above the stars3,
and look on living constellations where
thoughts shine and lifes lights sign is instant glee.

I would surrender much to take that path
and see at last the iron-eyed island tribes4,
trade insect music to demonic Dholes5,
learn song from larval devils in their hives6,
and draft my laughing crew from old-souled chaff.

Oh give her seven hulls and seven bells7
and give the bells their music and their voice,
and seven silken sails on seven spars.
Oh let her lines sound choired to sing out swells8.
I beg a ship to make the nightmare choice.

Send deadly winds from unknown sunlit lands9
and snakelike storms to stalk the cavern'd maze10.
I'll light my way with moon-lamps burning souls11
and count hours with a time-glass of white sand,
to gaze on whale-song ways where nightmare plays.

Bind up her hulls with wire from ancient mines12
and give her crystal anchors to make fast13,
Employ her dreaming captain armed with claws14
who knows each seas ships shape and each winds mast.
You give me ship and time, I'll learn her chimes
and make the Nightmare Sea my home at last.

I need to sail this sea before I die,
and leave behind the burning towers of Nox,15
to set my course for long forgotten poles,16
away from hidden rules and silent locks.17
Ask not why I the black rocks brave, but cry
with me, in joy "At last! My souls old goal!"


1. Though islands of compounded bone are well know to exist in the aptly-named ‘Bone Beach Sea’ , which lies above and feeds into the Nightmare Sea there are similar ossuary archipelagos in lesser numbers in the Nightmare Sea.

2. No records available speak of islands of carved Iron, however, records, even before the fall of Nox, were fragmentary as different Navigating Houses commonly hoarded relevant or useful information.
3. The ‘stars’ of the Nightmare Sea of course refer to predictable and familiar networks of bioluminescent phytoplankton which mariners regarded in a way not dissimilar to our celestial lights. No source from the Nightmare Sea is recorded as having ever seen ‘our’ stars. Several sources suggest or infer possible communication with these networks, although this may be poetic license.

4. Iron Eye tribes, known for partial or total replacement of their eyes with iron orbs and therefore spoken of as being able to perceive what we would describe as ‘magnetic waves’. A useful ability in the near-lightless environment of the Nightmare Sea.
5. Dholes have always been thought to be an eastern phenomena, though correspondence with Eki Ulale of the Yellow City does confirm that in some local folklore Dholes are thought to enjoy the music of insect bards. What an insect bard actually is was not stated in their correspondence.

6. No knowledge exists of ‘larval devils’ though the church does report several forms of Infernal being with insectoid features and if that Infernal Realm does border with any mortal ocean, the Nightmare Sea is a not-unreasonable possibility.

7. Modular multi-hulled ships are the common form of transport on the Nightmare Sea. Able to be re-configured in order to handle the highly variable environment conditions. ‘Seven bells’ probably refers to the reported practice of each hull carrying a differently-toned bell, as the ships hulls move through a swell in sequence the bells sound and the music of the bells can be ‘read’ by an experience captain or navigator to tell them about the nature of the local ocean and their possible location.

8. No mention is made in any other source of a ships lines tuned to produce certain sounds, although it does seem a likely method of a Nightmare Sea mariner. Surely though the lines would sound out wind conditions ?

9. The cultures of the Nightmare Sea do have some distant awareness of the existence of our upper world. Popular song and fable regard our gales and weather as ‘poisoned’ in some way.

10. Extremely long linear storms are reported in the phreatic-labyrinth parts of the Nightmare Sea.

12. Metallic-derived construction materials are common in the environment and actually cheaper than wood.

13. Crystal anchors, another apparently-poetic construct that is in fact simply a description of a common technology.

14. The ‘dreaming captain armed with claws’, perhaps the strangest reference in the whole poem. The dreaming may refer to the navigating methods of Nox, the claws? I have no idea. Perhaps some kind of Bagh Naka? A symbol of authority?

15. Of Nox, of course, you already know. Primary city of the Nightmare Sea and likely origin culture of the poem. (As I have stated before, I do not think this is an original piece of ‘folk culture’ or sailors song but rather a creation of the educated bourgeoisie that mimics some of its forms. The rhythmic and rhyming inconsistency and the ‘slipped lines’ strongly suggest a different origin.)

16. There are some indications of an alternate global awareness from the Nightmare Sea cultures with self-derived poles quite different to ours.

17. I think the ‘silent locks’ in this case to be simply a social metaphor rather than your suspected canal system but I am open to persuasion.