The latest and the last, in which all things are brought to a close. You can find the rest here: Cryptic Creatures, Academia Apocyrpha, and Mysteries and Mystagogues. 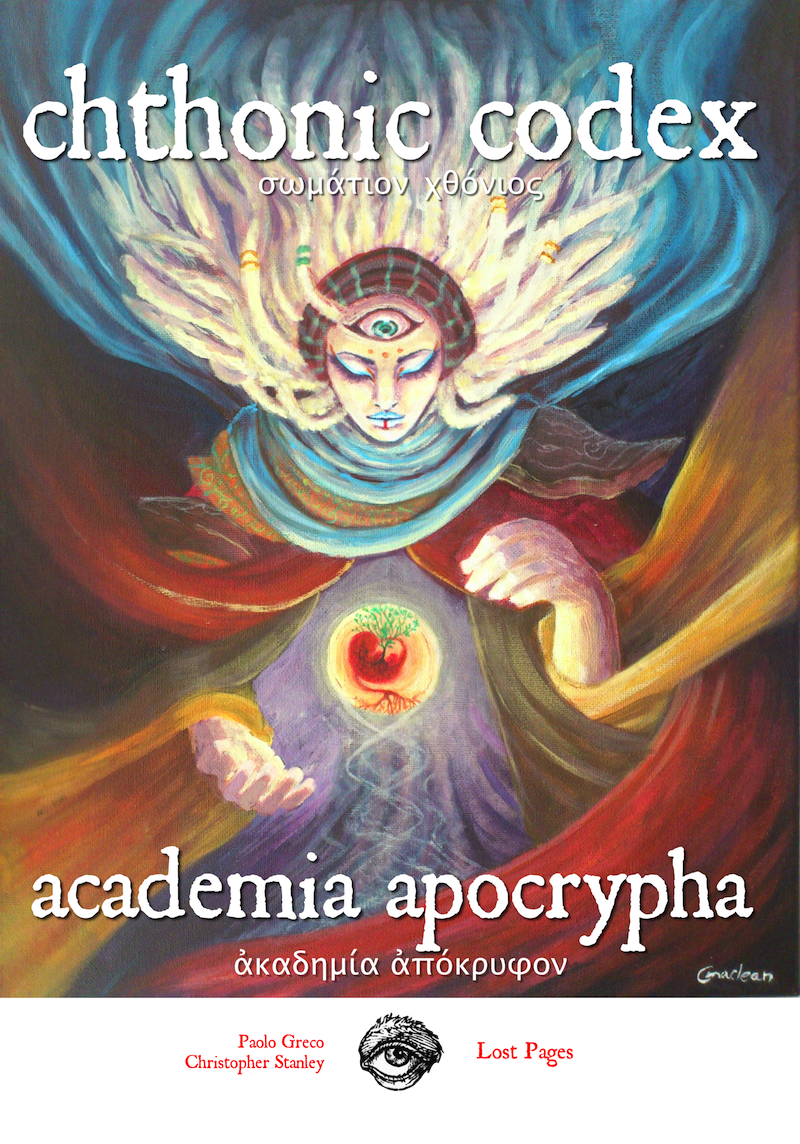 Lets look at the rest of the stuff in the box first..

A big A3 map of the Hypogea-

I hate mapping, or perhaps I am simply bad at it so nothing is as useful to me as  a usable free map that I can scrawl all over.

Chtnonic Codex maps are quasi-linear, made up of lines and loops.

(Underground mapping throws up some very weird problems. For instance, it really matters what side of a river you are on as you can't retreat from the route it carves. Everything is connected in a 1-2-3 fashion, so it really matters what things are next to or in line with other things. In the outside world, if the catacombs are one mile away and the monetary is two miles away, you can go around the catacombs to reach the monastary. It everything is connected via tunnel or karst valley, then you have to go past the catacombs to reach the monastery, this time and every time, so the relationship between you and that feature matters more.)

This is an attractive, simple clear-line map that your could use as a seed for CC or that you could put directly into almost any game as a tunnel system. The large area's of white space left by mapping tunnels means you can write all over it.

There are a bunch of intersecting loops towards the north of the map, giving PC's a lot of options for avoiding or interacting with things. The southern part has more straight lines.

I am still thinking about how underground mapping could or should work. (I mean large-scale, not just dungeon mapping.) It doesn't transpose exactly onto any other kind of map but I think generally areas with lots of interconnections are a bit more like cities or towns in how you think of them. At least they involve making a lot of choices about where to go and you can manipulate a little more the means of how you get there.

As you more into more linear areas the choices become more about how-you-get-past-this-thing. You don't get to decide so much where you are going (you have already made that choice) your effort is concentrated into dealing with the problem in front of you.

Interconnected zones are Vancian areas where you can run around avoiding trouble, swapping solutions and problems and improvising a lot. Linear zones are fatalistic Cormac Mcarthy stories where you are out on the plains and meet a thing and you deal with it with what you have and that's it (literally 'The Road')

These have a neat design so that when you fold them over to use them the spell-list is folded inside the booklet. Most of your immediate-use information is directly accessible and you can unfold to access the larger spell list when you need to.

A4 table of scroll scraps-

This is to hand out to players. This pretty much fills the space that a rumour-table would play in other settings.

These are really good. They are by J D Duncan, I advise you to click on the image to visit his Deviant Art page here and check them out yourself 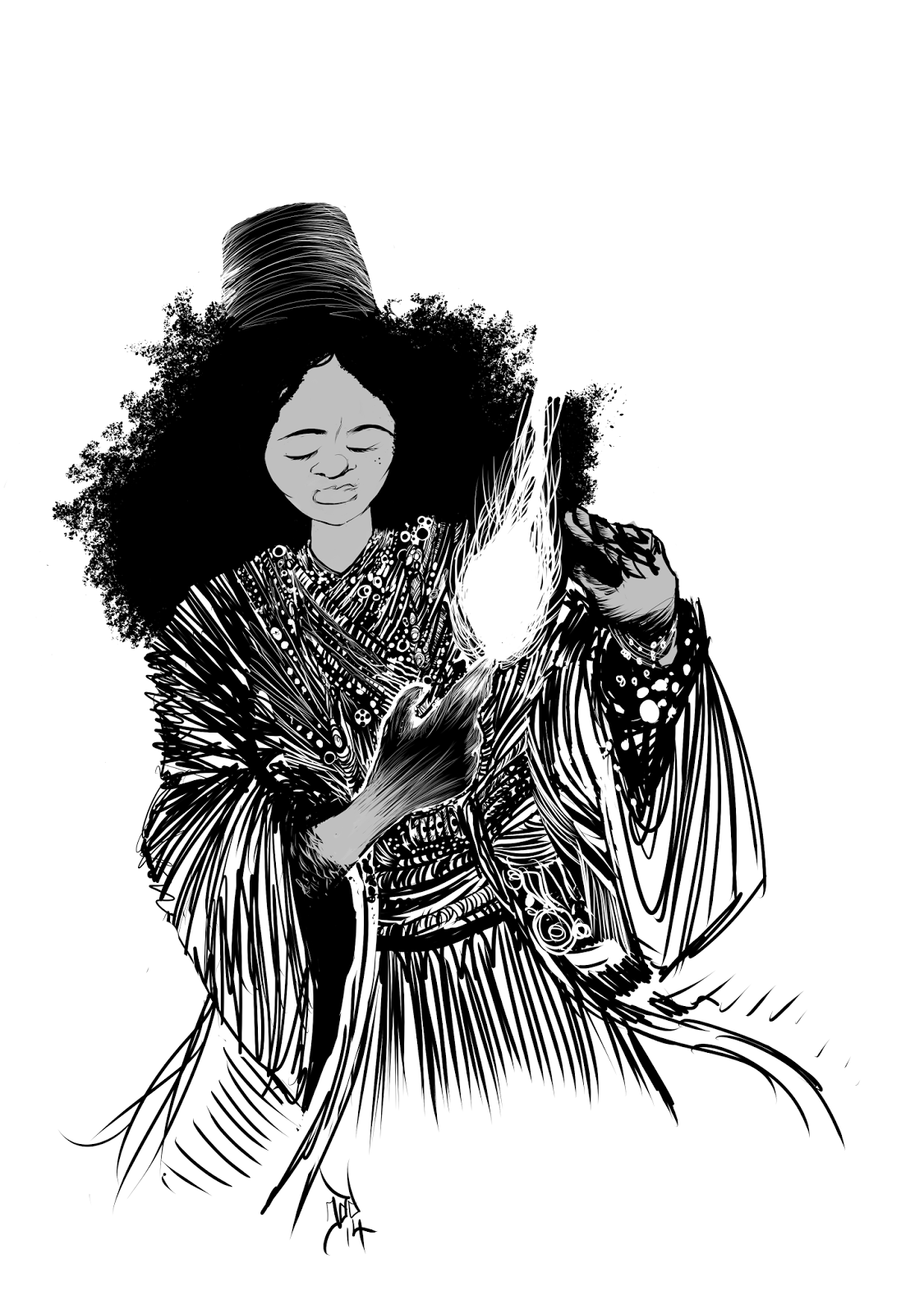 Any of these guys are already about a million times more interesting than anyone you will find in the 5th Ed players handbook.

The only (debatable) problem is that Paolo's description of Lvl 1 PCs in the book is essentially as massive dorks, in time-honoured D&D fashion, you start off looking like a tit. These images follow the description given but actually make the people involved look cool.

If there was anything likely to make someone with no RPG experience want to play the game it would be showing them one of these pictures and saying 'this is you'. They work well as separate images but would also work really well incorporated into the character gen section.

Our worlds betray their makers pretty quickly. You can't create freely and relentlessly for long enough to fill out a book without exposing some weird aspect of who you are. Zak is a godless warren of snow and decadence. Noisms is an opium dream of a distant east, Scrap is full of life and wild animals, I am an endless network of caverns full of cannibalism and madness.

Paolo is Renaissance-Chthonic rather than just Chtnonic. The Codex and the hypogea it describes is powered by strange energies leaking upwards from an inner world. But the caverns aren't totally dark, they are open to the sky much of the time and the stuff leaking in isn't black, its bright.

The book, like the setting, and by my own questionable logic given above, presumably like the man, is about deep energies interacting with the human world, not just our world but specific human beings.

CC is embodied, many of the rules lock you organically into the setting, its based around people, not monsters. There are monsters and they are dangerous but actual play would be driven not by them but presumably by what happens at work. Pissing off your teacher is more dangerous than pissing off a monster.

Many, maybe most adventures are about you going out into a world that somehow presses against you, walking into the wind, confronting things far from home, pushing order or at least humanity as far into the chaos as you can go. This is an adventure that takes place at home. If 'home' is a huge mad cavern complex. The valley of fire is big, but not LOTR big, you are not really meant to go on huge journeys elsewhere, you are meant to get to know this particular place really really well.

And its silly, much of the time. Tables arranged by rhyme schemes, odd objects turning up, bordering-on-slapstick rituals.

So: embodiment, human interactions, a human-centred world (of play I think), humour, sort-of-optimism and a world you learn to gradually comprehend more and more.

This is a unique and perhaps under-appreciated thing, quite unlike any other OSR product, that deserves more attention.

Email ThisBlogThis!Share to TwitterShare to FacebookShare to Pinterest
Labels: Reviews