A Review of The Peregrine by J.A. Baker 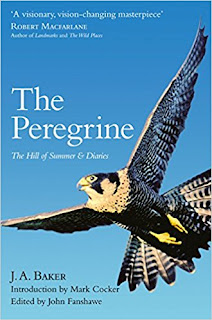 This book has some of the best prose I have ever read.

It can be hard to read. It is an intense reflective meditation with only a handful of human-specific acts. No human speaks to another in the book, or meets another. Baker does everything he can to avoid the rest of mankind and the season of shooting, in spring, when men come, sends him hiding in the woods.

The absolute entirety of the book is him facing out at nature, in depth. More depth than any single moment could afford any single mind. Baker has merged moments across decades, giving us one dense year, he has seized images and sensations from day-long wanders into crystal thoughts. What took him a decade to experience, we read in a week, or a few days (or over a month in my case), what took him a day to gather we read in an hour, what took him an hour we feel in a moment.

It's intense and inhuman, like drinking a strange, strong drink in little draughts. I had to put it down a lot. Like a huge panoramic landscape in text form, except that some optical illusion has been used to add more detail to the image than the eye could easily take, so the viewer has to glimpse and come back, then glimpse again.

It is a very timeless book, almost shamanic. Like staring into a deep mirror. The mind rebounds a little.

Few books I've read have made me stop and think about such a wide variety of other things while I was reading it, I will include some here, I think at least a third of my time reading the book was spend not actually reading the book.

There are no characters but Baker and the birds, and almost no action but trying to get closer to the birds.

It's impossible not to see the various Peregrines as Knights. Beautiful, dominant, insanely hyper-specialised murderers. And fastidious too, they wash every morning. All birds have parasites and, as the killer, the parasites of every kill are likely to jump directly to the Peregrine. Thus the regular baths.

This is something I hadn't considered previously relating to the aesthetics of apex predators as compared to scavengers. Predators feel clean, scavengers feel dirty. One element adding to this might be the leaping parasite issue; the killer must bathe or clean regularly or carry the vampiric gift of its prey; the scavenger can afford to look like shit, all of the bugs have fled.

But yes, the Peregrines as knights, proud, haughty, indifferent. Almost quasi-lazy much of the time, or at least not seeming to actually do anything. And they play, they play in the air, they fly out into storms for no reason, they whirl and swoop and fool around, much in the same way that T.H. White describes the Norman aristocracy.

And for its absurdly hyper-specialised and highly effective hunting style, masters of the dive and of open-air predation on other birds. If they have the height to dive upon them they can kill anything with wings they meet.

Though not always in close woods. There, the small manoeuvrable sparrow hawk rules, like some kind of petty noble in a hilly dukedom.

Towards the end of the book, a Peregrine duels a Sparrow hawk. It doesn't need to do this, it does it either for fun, if such a word can be used for a Peregrine, or because its hunting algorithm has fixed on the competitor, or for some more abstruse reason.

The Sparrow hawk avoids the Peregrine in the close woods, the larger bird doesn't have the room to dive upon it, or the manoeuvrability to reach it. It can't get in amongst the trees at speed. But the Sparrow hawk doesn't know this. It doesn't know that it is safe, and it makes a mistake, and that is the end of that.

The Peregrines do seem to have fun. They fly and act in highly individual ways, they ride storms and huge pillars of air for no observable reasons, they seem to have particular neuroses about certain places or patterns. It might not be unreasonable to call them persons.

Crows are thieves, or rude mechanicals. Crows are the only birds to majorly bother the Peregrines in any way. They persistently mob them in pairs, go after them, execute little flapping duels. I don't remember reading about many crows being eaten.

But Baker is not a Crow, and doesn't want to be one. This is not a crow story. There are almost no manipulations. Little is grasped. He does ride a bicycle at one point but we don’t hear about the steering, only the hawk like sensation of speeding downhill.

Where the Peregrine flies birds of every kind explode out of the ground, or flee from the air, like a dragon passing by, and of all these only the Crow goes right after them and dicks them about, and seems to survive.

Owls are often unwitting comedians, though not at night. Baker goes home at night but in the evening the Owls transmute from fools to utterly silent stealth-predators.

The poor Woodpigeons are the churls. Their fate is to be eaten by Hawks or shot by men. There are thousands of them in Autumn and by the end of Winter an apocalypse of cold, snow, hawks and guns has reduced them to a tiny rump of fearful refugees.

And then there are the minor guest appearances, the magical Hummingbird, the sombre Heron, the often-eaten gull. The freaky snipe with its tripped-out escape patterns.

So these are our characters and these are their lives.


And then Baker. A guy who wants to, emotionally and spiritually, fuck the Peregrine.

That’s a little fleshy. Let's say he wants to become one with it, to be possessed by it. All in ways that would be immediately intelligible and quite obvious to someone painting the wall of a cave 40,000 years ago.

Baker tries to get closer to the Peregrine. He lets them get used to him. Since any wild Peregrine is a sensory sphere of Superman or Daredevil-esqe full-spectrum hyper-sensitivity attached to a killing algorithm that seems like it was developed by an evil AI from the future, attached to a thing that can fly, this is hard.

He gets closer, the bird backs away. It's like a romance. A comedic interlude sees him get too close by mistake. The hawk must have been dreaming and he takes a poor turn and they end up only a few feet from each other. The hawk nearly has a breakdown, almost unable to process the seismic closeness of the ape. Even Baker is upset. They are both embarrassed.

There are a few interludes like this, with various birds, they tend to freak out of they find Baker where he is not meant to be.

Baker traces the kills of the bird. He is close enough, soon enough, to feel the warmth of the blood from a kill. He says at one point that he could almost eat from a particular kill.

The kiss comes in the midst of apocalyptic winter.

The winter in the Essex marshlands in this book is close to Blood Meridian, or the Book of Revelations. Birds freeze in place. The poor dammed woodpigeons are highlighted on the white ground, the earth is turned into a perfect killing ground for hawks, all that carefully evolved camouflage made irrelevant.

A Heron freezes standing up. A Hummingbird dives for a target beneath clear ice and, unable to perceive it, bounces off in incomprehension. It survives but all it can do now is starve. All most birds can do is starve. Except for the predators. A manic owl pops out from a snowbound hedge and trips right up to Baker like an arctic explorer cracked from scurvy coming up to a Polar Bear.

This is all deeply enrapturing and a bit upsetting, Baker says the eye can love what the brain and heart can hate, but he makes us love it too, though we see it only with our minds.

Barker enters a barn and picks up a whole frozen owl from its rafters like a sculpture. A non-yet-dead bird bangs off the roof and falls into the snow outside. The Peregrine has not finished its kill.

Barker goes out into the snow and sees the prey with blood welling from its eyes. He finishes it off, as he does for several birds he finds too wounded to live. The Peregrine comes and feeds.

And that’s the kiss. That is as close as they get, in action and in meaning. Baker does get a little closer physically later in the book, but of course he can never get as close as he wants or needs to be. He cannot become. He has to cycle home at the end of the day.

A curious and almost unconnected element of my reading this book is that I could never get very far into it without thinking about Artificial, or Mechanical intelligence. The idea of the Peregrine in particular, and of the birds generally, being a kind of model for a non-human intelligence and awareness took deep hold of me.

Well they fly around for a start, interacting with our world in ways that can be measured and predicted, but also having access to another dimension where they rule, and from which they can pop out at any time.

I think it was the mixture of deep beauty, post-human skill and superhuman awareness, deep sophistication across a very narrow, hyper, hyper-specialised field of experience, and a clear kind of awareness and personality of some kind, and an awareness of man in some way, combined with the fact that the Peregrine, and birds in general are just really fucking weird and stupid and don't know what's going on.

In one captured moment a wading bird just walks right over another species of bird, like a big dumb dump truck, as if it isn't there.

And yet they communicate in this deeply woven web of movement and song. The birds always know when the Peregrine is about. They listen to each others songs. They are hugely aware but they do not understand. I mean they don't even understand like a dog understands.

That strange, glassy, smooth, frantic, manic, subtle, beautiful, somewhat alien mixture of awareness and situational competency far beyond human limits, combined with just being completely headfucked like a broken machine when something happens from OUTSIDE CONTEXT.

The algorithmic flocks of birds make me think of mathematics. I feel they are mathematical animals, and perhaps we are too, but they are just far enough away that we can feel the numbers in them.

Yet they live. Maybe in the same way that a genuinely thinking machine might live. Sensing, acting, understanding, with a personality and particularity all its own, and yet living tangentially to us.

I imagine mankind living like crafty crows in a world of metal birds. The idea of the Peregrine, in that world, is terrifying.

Reading about the Peregrine made me think about what it would be like to be hunted by something designed specifically to kill you, that was specifically more intelligent than you in regards to the patterns you would use to escape. Yet that did not comprehend you. I think about the Sparrowhawk in the woods, safe but not understanding it was safe.

Well, its a remarkable book. If you care about prose you should get it, and get through it.