Mateo made this zine, the Pernicious Pamphlet. 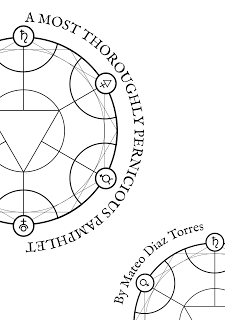 Here are some reasons I think it is good

Firstly he taught himself design and the tech stuff you need to do that, something I have so-far failed to do. The unity of space and meaning in RPG products means anyone who can combine writing, art and design  will become a kind of OSR omnibeing.

And the design is pretty good. Set out in a broadly Greco-ish style but a little lighter, clearer and more rational.

The stated aim is to compress as much setting information into character generation as possible and it fulfills that intent with grace and ease. Its a very small masterpiece of terse, useful, original, interactive information. Essentially a kind of Players Handbook for someones home game with only the novel, active parts and no fat. He says you could extrapolate an entire game world from just in information and you could.

I like the way he has handled languages. There are seven given, none are for human cultures, all are for types of being but the additional cultural uses of each language paint a very neat picture of a certain kind of social/supernatural world. The two that really interest me are:

Elegaic - Spoken by vampires, demons and the tragically damned. Also grimoires and spellbooks.

Lament - Common undead, boringly damned and the rebellious living. Most graffiti is in this language.

The idea of a class system of Undead languages makes sense and the linking of Magical script and high-status undead works really well in a not-entirely-rations-but-feels-right way.

The ideas of languages linking states of human existence as well as simply *cultures* is really fascinating to me. PC's will probably only ever come from one culture in their lives but they might experience many different states. Poverty, wealth, madness, death. By making the language of one kind of death the language of magic, and the language of another kind of death the language of rebellion Mateo has created natural in-game linkages between certain kinds of groups. You magician can probably speak to that Vampire. Your anarchist thief can probably speak to that skeleton, and it kind of makes a strange kind of organic sense that they would. 'Alignment' languages do a similar thing but that is a top-down highly rationally arranged system which always makes a world feel more designed, not more lived in. This is quite different and works better for me.

This is a rare kind of un-exchangeable currency, the coins of choice for Fairy Queens, Vampire Lords, Demigods etc. They allow for otherwise impossible transactions - souls, dreams etc.

I had an idea a little like this a long time ago called 'Occultum' but this is better and simpler and communicated much more gracefully and does in full what I had only half-imagined for Occultum.-magica characters. Does your fighter need to make a deal with a demon? It was always possible, but if he/she steals some Obols it now becomes quite reasonable and likely. You could use this currency to trade all kinds of intangibles, events, states etc.

And it makes high-yield treasure piles simpler, smaller and genuinely useful. Whats better than finding a shitload of gold? Magic coins you can trade for deamon favours or the souls of lost loves.

Albion has an effective postal service to Farie, The Sunless Lands, Heaven and Hell.

This is incredibly useful and a good idea all round. All you have to do is require that your players actually write an actual letter and take it to the supernatural postman. Between sessions you have time to write a reply and can deliver this, as an actual letter, to the players either at the start of the next session or at a moment of great tension.

The slow speed of communication with letters and the fact that players would actually have to write them in-character makes them perfect for allowing meaningful but controllable and not game-breaking contact between other planes. for instance with dead relatives, the spirits of former PC's, supernatural entities etc. This is good, more people should do this.

There are some good, simple old-school vampire rules that make them hell to play at low levels and interact in interesting ways as you level up. Like the whole thing, these are a very good example of terse, no-bullshit rules that are nevertheless very neatly engineered and evocative.

There are rules for clerics of Albions horrid Chthuloid Queen and three weird kind-of demigods for your characters to pimp themselves out to and hang out with. The rules for these are as simple and well thought out as the rest.

The three entities are evocative and interesting personalities, as well as that, like everything in the pamphlet, they are chunks of setting information. Everything in it, pretty much every word, does two jobs and contributes to two structures. Firstly it does what it need to help a character make interesting choices in creation. Secondly it highlights and illuminates a piece of the imagined world.


Its so fucking short and so lean that I can't really write much about it without giving stuff away. I kind of already have just by mentioning what stuff is. There is more I haven't mentioned. Read it, use it, chop it up or throw it at a player and say 'yeah you can do this stuf'. $7 for the hardcopy, including postage I think.
Posted by pjamesstuart at 13:06